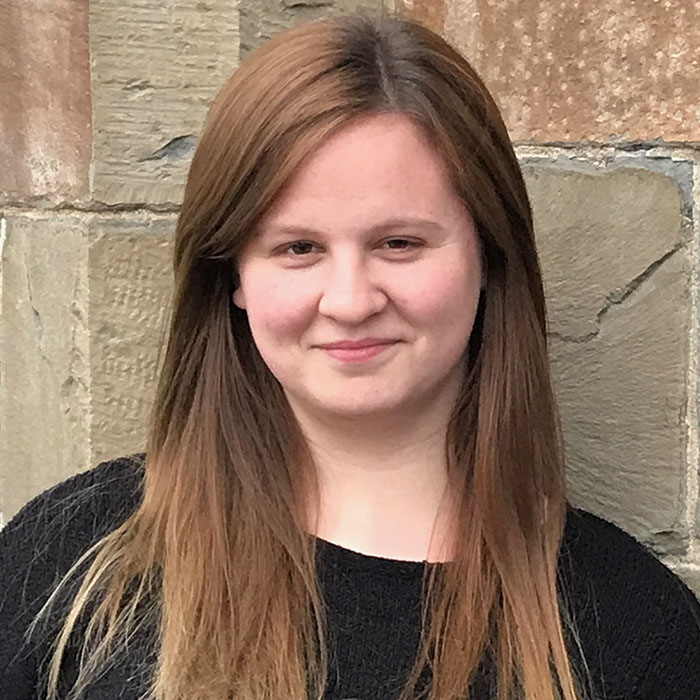 Elizabeth Altman entered Union College as a biology major with tentative plans to go into medicine, but it wasn’t until she suffered an illness after her freshman year that she found a real motivation for her chosen career. “It was definitely a sparking point for me, being laid up in bed and trying to recover from surgery, and trying to figure out how I got there in the first place,” says Elizabeth. “I’m actually hoping to get into an MD/PhD program so that I can study both the molecular mechanisms of disease and be able to practice as well.” Elizabeth has worked in hospitals and research laboratories during her undergraduate career, and took HMX biochemistry and physiology courses while preparing for the medical school application process.

It was kind of a three-fold reason. One, I wanted to see if I really liked looking at these topics through a medical point of view, to verify that I wanted an MD career and not just a PhD research career. Secondly, I thought it would be great preparation for the MCAT. And third, I thought it would be great for upper-level biochem courses for me to have a background in that. While I haven’t taken the MCAT or obviously gone to medical school yet, I can say that it’s been really helpful for our upper-level biochem courses here. Just for example, we were talking about enzyme regulation today, and I felt so much more confident that I’d already talked about it and it wasn’t a totally new topic, so I was able to focus on the details as opposed to the basics.

What were your favorite parts of the courses?

For the physiology course, it was really the fact that the professor kept coming back to the same concepts to explain so many different phenomena in the body. I thought that was really helpful to make things clear and something that I could understand and apply to different scenarios even if it was something that we didn’t specifically go over in that course. So for example, he continuously used Ohm’s Law as the background for something – it was something that I had heard before in a different context in a physics class, and he was able to apply it to multiple things in the body that I had never thought that would work for. So being able to take that one concept that I had some experience with and apply it to medicine in a way that I hadn’t thought of is something that still sticks with me today.

For the biochemistry course, I would definitely say that [I appreciated] the relationship between the two professors that were teaching it, and how they would so clearly tie in their own specialties…They had such a good conversation and were able to ask each other questions that built off each other, so they emphasized the molecular understanding and brought it up to a patient understanding. So you could both zoom in and zoom out in the scenario and still understand what was going on.

What aspects of the online learning experience did you find most helpful?

I loved that at the end of each video there were questions that you could check yourself with – that was a great way for me to say either I really understand what’s going on or I need to re-listen to that video because I obviously missed something. That’s something that some of the professors will do here in the middle of class, they’ll stop and have us do a couple questions as a group, but it’s never as helpful as it is when you’re sitting there and you’re working through it by yourself in a room, alone, just focusing on the material. I think that was really, really helpful and I wish that was incorporated more in in-person classrooms.

How are you using what you’ve learned in your other courses?

I think it’s really helpful to just review the notes, and especially taking a biochemistry course now…I continuously go back to my notes and just really try to incorporate things from that into my understanding.

Would you recommend HMX courses to other pre-med students?

It was really helpful for me to confirm that I enjoy the medical view of science and not just the research view. I think it would also be very helpful for someone who has only considered pre-medical routes for their life, to be able to look at the molecular mechanisms that maybe you don’t talk about as much in your pre-med courses. So I think going back to seeing the molecular ties to what’s going on systemically in the body was really important to me to verify that this is what I want to do, and also get excited going into the super-stressful application process.